This was my first Child novel. I’ve already seen some movies based on Child’s famous character but never got the chance to read one of the books. It was one of those authors I wanted to have a taste on, mostly because of his worldwide popularity and because his bookcovers were screaming “take me” from all bookstores at all different angles.

However, I must say the book was meeh… or is it because I expected more?

One could believe that after so many novels based on the same character, the character would be well developed and one would be able to read Jack Reacher without any problems. However, I got no taste of the personality of this character. I didn’t understand the reasoning behind his reactions, what are his objectives, his beliefs, etc. I only understood that he acts impulsively and that he is good with weapons. Other than that, there was no reason to make me like him or care about him. Is this because, in a Lee Child thriller, there is no need to know all these aspects about his famous character anymore? I don’t buy this.

In this Novel, Jack Reacher suddenly reaches the town of Mother Rest (apparently only because of curiosity at this town’s name). In this town, he meets private investigator Chang, a woman that suddenly trusts Reacher without any problem. In a couple of hours, he suddenly risks his life in order to help Chang and will go through to the end of the world to solve the mystery of Chang’s missing colleague. The book will take the action from San Francisco to other cities while all sorts of villains start chasing the duo that apparently has come too close to the truth. When the plots starts to get thicker, all sorts of scientific explanations arise and some of them feel forced to fit and explain the initial quest of the novel.

Points of view are also blurry in this book. There were many instances when you didn’t follow the book’s point of view. You started to wonder if a certain feeling or line of thought was happening in Reacher’s head or on her colleague Chang? If it was on Chang’s, how did Reacher know she had that feeling? Or did we suddenly changed points of view? Confusing.

Nevertheless, Child is skillful when it comes to describing action scenes, fights, gun exchanges, etc. For those interested in these details, they might find the most interesting narrative in these fight-heavy scenes. 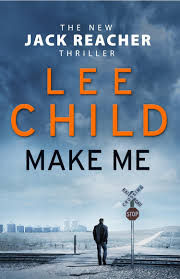 It might be that this novel was not my cup of tee and I expected more from a famous author like Child, but I’ve read many thrillers before and I firmly believe that all the details described above (character development and points of view) can be equally and masterfully achieved.

It was not a bad story but not what I expected.